Vancouver Pro Musica is pleased to invite all BC composers to submit new miniature compositions for solo erhu for presentation as a continuing part of our “A Little Further Series”. For this call, we feature the Vancouver-based erhu performer Nicole Ge Li. Deadline for submissions is Friday, July 30, 2021. Accepted miniatures will be presented by Nicole as an online concert that will be recorded later this fall (date to be confirmed). 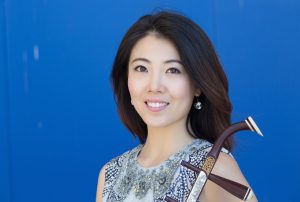 Nicole Li is currently an Erhu Instructor of VSO School of Music, as well as an Ensemble-in-Residence at the University of British Columbia.

Li began learning Erhu at the early age of 6, and started training professionally at age 11 in the Wuhan Conservatory of Music Affiliated Secondary School, where she received a full scholarship for four consecutive years. Li was later admitted to the prestigious Shanghai Conservatory of Music, where she earned her Bachelor of Music degree in Erhu performance in 2008.

An active Erhu performer, both as a solo artist and as a member of an ensemble, since 2000, Li is a much sought after performing artist in Vancouver. In 2011, she organized and performed in her own Erhu recital in Vancouver, which was also the first full-scale Erhu performance event of its kind held in Canada. In 2013, she was invited to perform for Prime Minister Stephen Harper as the only Chinese instrumental soloist at the Chinese New Year Gala in Vancouver. Later that year, Li performed the celebrated Erhu concerto “Butterfly Lovers” with the BC Chinese Orchestra. . In 2015, Li was a recipient of the prestigious Outstanding Young Leaders Medal of Merit Award. Starting from 2012, Li is collaborating with virtuoso pianist Corey Hamm in bringing the first of many world premieres of new works for Erhu and piano by Chinese and Canadian composers. These performances are being supported by a Canadian Art Council grant as part of a cross-cultural music exchange project. In 2016, “PEP-Piano and Erhu Project ” has become an “Ensemble in Residence in UBC”, and also has had a successful Tour in China during May 2016. 2018 Chinese New Year, she was invited to perform Canada’s national anthem at Canucks Game as the first Chinese Instrumental soloist.

As a performing artist, Li is known for her interpretive expressiveness, stylistic versatility and ability to transverse a wide range of musical genres from the East to the West, from the traditional to the avant-garde. As a teacher, Li is known for her ability to inspire students to excel, as evidenced by all her students’ successful exam results.

Li works out of her own establishment, JW Musical Studio in Richmond BC, where she teaches, rehearses and records her growing Erhu repertoire.

We welcome submissions from BC composers of all styles and genres. Miniatures must be scored for solo acoustic erhu (any type of soundscape accepted) To submit your miniature, complete the online form at the bottom of this page. Payment may be made through Paypal, or by cheque mailed separately.

Only submission forms completed through this website will be considered.

All submissions must also meet the following requirements: