Join us for a free online concert in our A Little Further Series!

premiering on Friday, October 29, at 7:30 pm on our YouTube Channel

Programme: (not in concert order)

Dubravko Pajalic: As the deer pants for streams of water 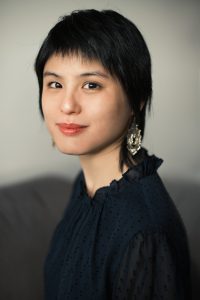 Angelique Po is an organist, pianist and harpsichordist living and working in Vancouver, BC. She is the Music Director and organist at Central Presbyterian Church in Vancouver, and President of the Royal Canadian College of Organists (RCCO) Vancouver Centre, an organization which supports the community of organists across BC and their continuing education. Her versatility and interest in a broad range of music styles have led her to collaborate with a variety of ensembles and soloists, as well as perform the world premieres of many new works. As the featured artist with trombonist Jeremy Berkman for Vancouver Pro Musica’s Sonic Boom 2021, she premiered ten new works written for trombone and organ by BC composers in an online concert in March 2021. She was recently featured in performance of Vierne’s Symphonie No. 1 with seven Western Canadian organists in RCCO Victoria’s online Halloween organ concert. Her performance of Beethoven’s Pieces for Musical Clock was one of six performances presented in St. Mark’s Evangelical Lutheran Church’s BTHVN 2020 concert: part of a global event sponsored by the Beethoven Jubiläums GmbH (Beethoven Anniversary Society) celebrating the 250th birthday of Ludwig van Beethoven.

Angelique has performed with numerous ensembles, including the Vancouver Bach Choir, Postmodern Camerata, Vancouver Oratorio Singers, Abendmusik, and the Church Music Ministry of Canada, and has served in organ appointments at St. Mark’s Evangelical Lutheran Church, and First Baptist Church in Vancouver. As a composer, she has written for various small ensembles, including pianist Michael Park, PEP (Piano and Erhu Project) with Corey Hamm and Nicole Ge Li, and has written a number of art songs. At the University of British Columbia, she studied piano with Dr. Sara Buechner and harpsichord with Doreen Oke. On the organ, her mentors include Kevin Bowyer, Michael Murray, and Edward Norman. In addition, she has received valuable coaching from Ton Koopman, Marnie Giesbrecht, and David P. Dahl.