A three day festival of exciting new music created by BC’s finest composers, performed by eclectic combinations of some of BC’s finest musicians!

In accordance with the Provincial Health Order,

Please allow additional time to confirm vaccine status. Thank you for your patience.

About the Artist: Valerie Whitney 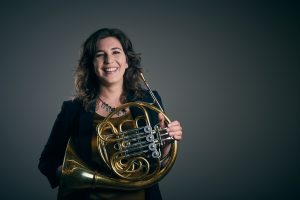 Dr. Valerie Whitney was appointed to the faculty at the UBC School of Music in 2018, where she is now Assistant Professor, Horn and Brass Area Coordinator. Dr. Whitney has been performing in and around the Chicagoland area for over a decade. She regularly appears with some of the nation’s most esteemed performing organizations, including the Chicago Symphony Orchestra, the Chicago Lyric Opera, and the Milwaukee Symphony Orchestra. In 2010, she was invited to serve as guest principal horn with the Florida Orchestra for two weeks. From 2013–2016, she served as hornist of Fifth House Ensemble, during which time she performed and led masterclasses at nationwide universities as well as educational programs in various Chicago public schools and community centers. In 2017, Dr. Whitney was the first candidate to earn a DMA in Horn Performance from Northwestern University. She is a graduate of Wheaton College and Northwestern University. 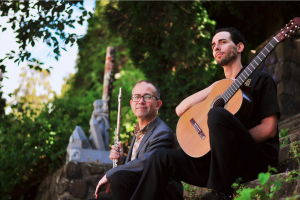 The McGregor-Verdejo Duo was formed in 2016 by guitarist Adrian Verdejo and flutist Mark Takeshi McGregor. From Bach to Piazzolla to Baca-Lobera, the Vancouver based duo is committed to re-envisioning established classics, rediscovering forgotten and neglected works, and forging bonds with modern day composers by commissioning and performing new music for flute and guitar. Past engagements include collaborations with soprano Dory Hayley, performances at Vancouver Inter-Cultural Orchestra’s Global Soundscapes Festival and Powell Street Festival, and concerts throughout Western Canada for the HealthArts Society. The Duo’s dedication to fostering new music has resulted in the premieres of works by composers Jennifer Butler, Kara Gibbs, Rodney Sharman, and Hiroki Tsurumoto, as well as forthcoming commissions by Farshid Samandari, Mark Marinic, Alfredo Santa Ana, Ana Lara, and Diego Lozano.

During the 2020/21 season, when the coronavirus pandemic put live concerts on hold, the McGregor-Verdejo Duo moved their activities online, creating videos of music by Jocelyn Morlock and Celso Machado with assistance from the Canada Council for the Arts, BC Arts Council, and Creative BC. Forthcoming projects include the duo’s debut album, which will feature new and recent works for flute and guitar by Canadian, Japanese, and Mexican composers, and an artist residency at the Centro Mexicano para la Música y las Artes Sonoras in Morelia, Mexico.